The five new EFR-534RB and EFR-537RB models were produced through collaboration with the Infiniti Red Bull Racing Formula One™ team, which Casio has supported as an official partner since 2009.

There are two base models for the new watches. The first is the EFR-534, which comes with Super Illuminator, a high-brightness LED light that illuminates the dial more clearly than a regular LED light. The other base model is the EFR-537 with Neon Illuminator, which uses invisible light from a black light LED to make specially coated dial features glow. The team colors of Infiniti Red Bull Racing —blue, yellow, red and purple— are used to accent the hands and inset dials. With the team logo on the dial and also emblazoned on the special packaging, these new watches are worthy of their limited edition status.

Sebastian Vettel said "The new collection looks great! I like the use of the Infiniti Red Bull Racing colours, in particular the blue, which is a cool feature in the Team's garage this year."
Hiroshi Nakamura, Senior Managing Director and Senior General Manager of the Global Marketing Headquarters, Casio Computer Co. Ltd., had this to say about the new watches: "It is an honor to be able to release a product in association with Infiniti Red Bull Racing, a team with worldwide popularity. We will continue to strengthen our relationship with the team through future collaboration models and other activities."

Christian Horner, Team Principal of Infiniti Red Bull Racing commented "Time is vital in Formula One, everything runs to a schedule whether it be race sessions, production lines, build programmes or events at the race track. Casio's launch of the new collection of Infiniti Red Bull Racing Edifice watches is perfectly timed, with all of the new design regulations with Formula One and a new driver line up, we all look forward to sporting our new watches and building upon the success of the current partnership." 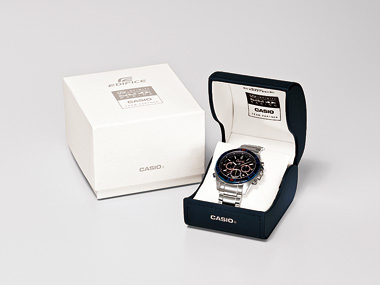 Cart 0
Compare 0
Prev
Next
Right
Top
has been added to compare.
has been removed from compare.
Continue shopping Compare
-